SOMA officially in the European Commission’s plan to tackle disinformation

Disinformation is one of the biggest challenges of our time and the European Commission is committed to defend European values and European democracy, limiting the spread of harmful disinformation. This needs a broad range of activities. A timeline has been officially published showing how much effort has already been invested on this issue up to now. 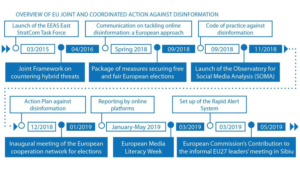 Since 2015, with the launch of the European External Action Service (EEAS) East StratCom Task Force, the EC has been attentive on the topic, increasing measures and actions to limit the threats of disinformation and to empower the citizens. Just some examples reported in the Figure: in 2016 a Joint Framework on countering hybrid threats was implemented and further measures have been deployed to protect elections in 2018 and in 2019. In parallel, many activities have been implemented to increase media literacy skills, organizing a relevant event called “European Media Literacy Week” to foster international collaboration, contributing to the informal EU27 leaders’ meeting in Sibiu, Romania.

Moreover, the European Commission started and supported working groups aimed to define concrete lines of action. The first document was published in 2018 and is on the Communication on tackling Disinformation. The next step has been the development of a Code of Practice against disinformation, a reporting by online platform and an Action Plan against disinformation. Finally, a Set Up of a rapid Alert System has been deployed.

Another important step in the strategy has been the launch of the Social Observatory for Disinformation and Social Media Analysis (SOMA) in November 2018. SOMA is a European project funded under H2020 aimed at providing support to a European community that will jointly fight disinformation. SOMA, in fact, has established a network of researchers and fact checkers to work together to use online tools developed by the project to jointly work to detect and debunk disinformation, but above all to increase collaboration in tackling the phenomenon in general. Among other actions, SOMA develops media literacy sessions to teach students and media professionals on how to manage and act against disinformation. Moreover, SOMA is defining a comprehensive framework to map the impacts of disinformation on our societies which is planned to be published in February 2020.

In addition, SOMA has launched two national centres of excellence: Aletheia, hosted by the Luiss Data Lab in Italy, and Remid, based at the Aarhus University in Denmark. The aim is to foster the research on the topic also at national level, including researchers and experts working on vertical topics such as health and climate.