As our H2020 project is close to its end-date, we would like to invite you to the event ‘Countering disinformation: strategies, policies, research’, that we are organising online, on Wednesday April 21st 2021, at 14.00-18.30 CET, in order to discuss the latest developments in the field of disinformation and the present activities that are geared against it. 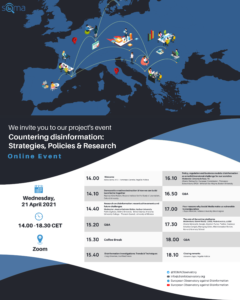 You can join the online event by registration only. Register here.

More information about the event

Democratic creative destruction – and how we can build back better together – Rasmus Kleis Nielsen, Professor, Reuters Institute for the Study of Journalism, Oxford University

What are the main defining features of the democratic creative destruction that has challenged institutions and individuals alike, and resulted in platforms wielding such power, even as they have also empowered us in many important ways? Using data from Reuters Institute research I will identify key aspects of the situation we are in as we face a structural transformation of free expression and many serious problems with disinformation, and suggest some ways in which we might be able to build back better by working together.

Disinformation campaigns and actors are constantly evolving. They exploit emerging platforms, incorporate new technology, and find new ways to evade detection and influence people. This talk looks at key trends and approaches in investigating disinformation, and offers tips for how to stay ahead of the game.

As social media become major channels for the diffusion of news and information, it becomes critical to understand how the complex interplay between cognitive, social, and algorithmic biases triggered by our reliance on online social networks makes us vulnerable to manipulation and disinformation. This talk overviews ongoing network analytics, modeling, and machine learning efforts to study the viral spread of misinformation and to develop tools for countering the online manipulation of opinions.

Joint work with collaborators at the Indiana University Observatory on Social Media (osome.iu.edu). This research is supported by the National Science Foundation, McDonnell Foundation, DARPA, Democracy Fund, Craig Newmark Philanthropies, and Knight Foundation. Any opinions, findings, and conclusions or recommendations expressed in this material are those of the authors and do not necessarily reflect the views of these funding agencies.

Bios of Speakers and Moderators

Tommaso CANETTA, deputy Director of Pagella Politica. He has a master’s degree in Law, with specialization in International and European Law, and a master in Journalism. He has been a professional journalist since 2012 and a fact-checker since 2016, when he started his work for Pagella Politica.

Simona DE ROSA is partner and senior researcher of T6 Ecosystems srl. Since 2015, she has participated in responsible positions in more than 10 European projects funded by the European Commission under the research frameworks FP7 and H2020. She is mainly in charge of policy analysis, participatory processes for policy development and impact assessment analysis. She is currently deeply involved in the research community on social media and disinformation being also an active member of the Media community at European level, as Vice-chair for Liaison of the European Technology Platform funded by the European Commission, New European Media Initiative (NEM), and member of the Aletheia Centre of Excellence to study Disinformation.

Fabio GIGLIETTO, PhD, is Associate Professor at the Department of Communication Sciences, Humanities and International Studies at the University of Urbino Carlo Bo. His main research interests are theory of information, communication, and society with a specific focus on the relationship between social systems and new technologies. On these topics, he has published extensively in journals such as the Journal of Communication, Information, Communication and Society, the Journal of Broadcasting and Electronic Media, Social Media + Society, and the International Journal of Communication. Full list of publications at https://scholar.google.it/citations?user=FmenbcUAAAAJ&hl .

Bente KALSNES is an Associate Professor, Department of Communication, Kristiania University College. Her research interests include political communication, social media, fake news, disinformation. She is the author of a book about fake news and disinformation in a Norwegian context (Falske nyheter: Løgn, desinformasjon og propaganda i den digitale offentligheten, Cappelen Damm Akademisk, 2019), and is part of the research project Source Criticism in an Age of Mediated Disinformation (SCAM) financed by the Norwegian Research Council. Kalsnes is a member of Freedom of Speech Commission, appointed by the Norwegian Government.  Kalsnes worked as a journalist and communication advisor before she started working in academia.

Alexios MANTZARLIS joined Google in 2019 as the News and Information Credibility Lead. In this role, he works on product and partnership efforts to counter misinformation, particularly around fact-checking and news credibility signals. Prior to joining Google, Alexios served as the founding director of the International Fact-Checking Network (IFCN). At the IFCN, he helped draft the fact-checkers’ code of principles and shepherded a seminal partnership between fact-checkers and Facebook.

Filippo MENCZER is a distinguished professor of informatics and computer science and director of the Observatory on Social Media at Indiana University. He holds a Laurea in Physics from the Sapienza University of Rome and a Ph.D. in Computer Science and Cognitive Science from the University of California, San Diego. Dr. Menczer is an ACM Fellow and a board member of the IU Network Science Institute. His research interests span Web and data science, computational social science, science of science, and modeling of complex information networks. In the last ten years, his lab has led efforts to study online misinformation spread and to develop tools to detect and counter social media manipulation.

Rasmus Kleis NIELSEN is Director of the Reuters Institute for the Study of Journalism and Professor of Political Communication at the University of Oxford. He was previously Director of Research at the Reuters Institute and Editor-in-Chief of the International Journal of Press/Politics. His work focuses on changes in the news media, on political communication, and the role of digital technologies in both. He has done extensive research on journalism, American politics, and various forms of activism, and a significant amount of comparative work in Western Europe and beyond.

Ylwa PETTERSSON has led Twitter’s public policy work in the Nordics and Israel for the past two years, and recently joined Twitter’s EU policy team in Brussels. Before joining Twitter, Ylwa worked on development issues at international organizations and embassies in Stockholm, Vienna, Dar es Salaam and Khartoum.

Thorsten QUANDT is Full Professor of Online Communication at the University of Münster, Germany.  His work focuses on societal changes connected to the Internet and new media. Recent research includes studies on “dark participation”, online propaganda, dysfunctional online use and the transformation of journalism.  His research group’s approaches and methods operate at the intersection of communication studies, psychology, and data science. Previous academic stations include the University of Hohenheim, the Free University Berlin and LMU Munich, and he was a visiting professor at Stanford University, the University of Oxford and the University of California (Santa Barbara).

Gianni RIOTTA is the Dean of LUISS School of Journalism and the Director of LUISS Data Lab. An internationally renowned author, journalist, anchorman, he teaches on New Media and Big Data at Princeton University and LUISS University. As a journalist, he is a regular contributor for the daily newspaper La Stampa and a former Editor in chief of the financial newspaper Il Sole 24 Ore, Rai 3 and the news bulletin TG1. He has contributed to the Washington Post, Le Monde, Foreign Policy, and the New York Times. Riotta sits on the Advisory Council of the Department of French and Italian at Princeton University; he also collaborated with IMT School for Advanced Studies Lucca. He received the America Award of the Italy-USA Foundation in 2013. Already a permanent member of the Council on Foreign Relations and the Foreign Policy editorial board, he has been appointed Executive Vice Chairman of the Council for the United States and Italy in 2018. Furthermore, Riotta was nominated among the 39 experts to the European Commission High Level Group (HLEG) on fake news and online disinformation, a theme he also deals with for the World Economic Forum in Davos.

Nikos SARRIS is a Senior Researcher at MKLab of ITI–CERTH and a member of MeVer. After receiving his PhD from the Aristotle University of Thessaloniki Nikos worked at ATC for 15 years, where he headed the Innovation lab for 7 years and is now the Head of technologies against disinformation. He has been involved in many projects focusing on the semantic ‘understanding’ of news content and the assessment of its trustworthiness, coordinating the development of two related products: TruthNest and Truly Media. Nikos is the coordinator of the EC-funded SOMA project tasked to empower the European Observatory against Disinformation.

Francesco SCIACCHITANO is a highly experienced lawyer serving with the Communications Guarantees Authority (AGCOM). He is specialized in communications and administrative law and has a passion for international relations and cultural diversity. Since 2005 he has been in charge of all the international projects carried out by AGCOM in the Balkans and in the Middle East area of North Africa, has carried out a peer review of the communications sector in various states and has directed working groups in the main platforms international regulators. In recent years he has coordinated the ERGA Task Force on disinformation in digital platforms.

Craig SILVERMAN is an award-winning journalist and author and one of the world’s leading experts on online disinformation and digital investigations. He’s the media editor of BuzzFeed News where he covers platforms, online disinformation, and media manipulation. Craig is also the editor of the European Journalism Centre’s Verification Handbook series. These free online books offer world-class guidance on how to verify online content and investigate disinformation and media manipulation. He received a Polk Award in 2021 for his coverage of Facebook and is the recipient of the Carey McWilliams Award from the American Political Science Association, which honors “a major journalistic contribution to our understanding of politics.” His 2019 series exposing a global Facebook advertising scam was named investigation of the year by the Canadian Association of Journalists.

Marshall VAN ALSTYNE is a Questrom Chair Professor at Boston University, with expertise in platforms and information economics. His work explores how ICT affects firms, products, innovation, and society. Work appeared in Science, Nature, Management Science, American Journal of Sociology, Strategic Management Journal, Information Systems Research, MISQ, The Economist, New York Times, and Wall Street Journal. He has made significant contributions to platform economics and strategy as co-developer of the theory of “two-sided” markets. He co-authored the international bestseller Platform Revolution. His research has received more than 18,000 citations, two patents, NSF Career, SBIR, iCorp, and IOS awards, and a dozen different academic awards.  He received a BA in computer science from Yale and MS and Ph.D. in information systems economics from MIT.

Giovanni ZAGNI PhD, joined Pagella Politica in 2015 and is currently its Director. A journalist, he is a member of the Technical Table on pluralism and correctness of information established by the Italian Authority for communications (AGCom), is a member of the Monitoring Unit on Disinformation around Covid-19 established by the Italian government in April 2020, as well as . He has given lectures on fact-checking and disinformation/misinformation-related topics in various Italian universities and public events. He is an alumnus of the Scuola Normale Superiore in Pisa and holds a PhD in Romance philology from the University of Siena.His articles on topics ranging from foreign policy to the debate around online misinformation have appeared also in Il Foglio, Rivista Studio and the Italian version of Scientific American.