Debunk EU: Incidents at the Belarusian NPP are being covered up using falsehoods, mockery and made-up facts

‘Prior the launch of Belarusian Nuclear Power Plant (BelNPP) in Astravets, voices from international community have expressed their concerns about the safety of the plant. Being the closest neighbour, Lithuania was one of the most active opponents of the BelNPP, which has resulted in continuous attempts to discredit their concerns.’

As seen in Debunk EU’s analysis throughout December 2020, various Russian media outlets were accusing Lithuania of being unreasonable and causing unnecessary panic about the plant being not secure enough. Moreover, there were insinuations that Lithuania together with European Union, are interfering in Belarusian affairs and there is a political reasoning behind their refusal to buy energy from the BelNPP. 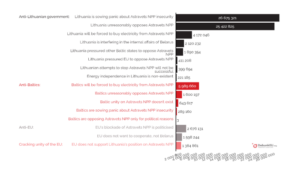 In specific, the Debunk EU team has examined 406 articles (December 2020) in the Russian media, 148 of which contained disinformative or misleading messages about Lithuania’s position on the BelNPP.

You can read the full analysis here.