Debunk EU: ‘Aggressive’, ‘offensive’, and ‘breaking its promises’: portrayal of NATO in the Kremlin-controlled media

As seen in Debunk EU’s latest analysis, despite the focus of the media mostly falling on the COVID-19 pandemic, NATO remains one of the main topics discussed by Kremlin-related media.

In specific, harmful narratives are being pushed to create a sense that NATO is using its smaller members as cannon fodder, the Alliance making up the ‘Russian threat’, and violating its promises not to expand in post-Soviet countries.

According to the analysis carried out by SOMA’s member, in December 2020, narratives focusing on military agenda of NATO outweighed the communication associated with political issues of the Alliance. Additionally, Baltic countries were often accused of their ‘inadequate NATO defence spending’ more than any other member state.

In addition, around that time Debunk EU detected 4615 articles related to NATO, which were posted by hostile media sources. Within the period, Debunk EU analysts reviewed 3136 articles with potentially harmful content, identifying 938 articles with false and misleading content from 97 media outlets. The articles had a potential reach of 989 million contacts. 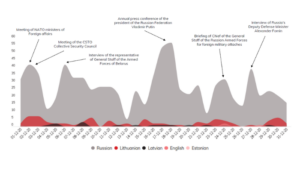 As it is mentioned within Debunk EU’s analysis, the main distributors of NATO-related disinformation and misinformation in the Baltic countries in Russian and English languages were Kremlin-aligned media sources rambler.ru, ria.ru, tsargrad.tv and gazeta.ru. As for the local language media outlets, Kremlin-funded sputniknewslv.com and sputniknews.lt stood out as the falsest and misleading content publishing media sources in Latvian and Lithuanian languages, respectively.

You can read the full analysis here.